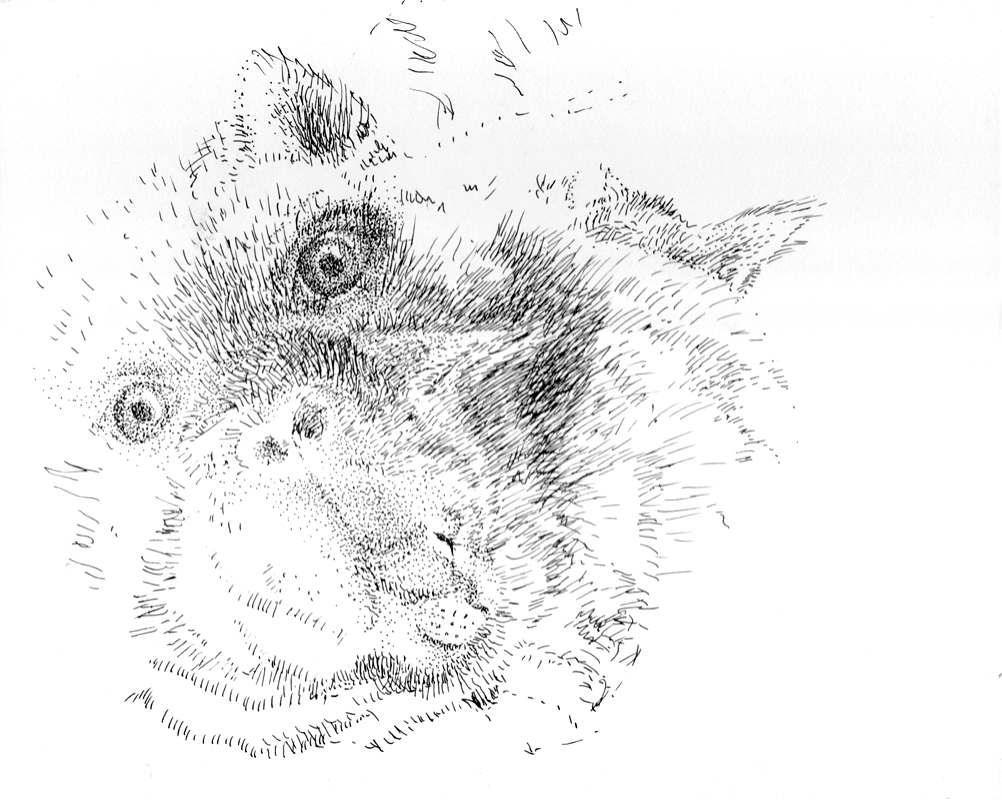 The drawing that begins this post is unfinished. It’s in limbo, as I decide whether it needs more work (it’s hard for me to leave things white). As its creator, it’s difficult not to smooth out the awkwardness and “normalize” both creatures to minimize the tension.

While I’ve long accepted that drawing is an exercise in putting up with ugliness & awkwardness, the awkwardness still bothers me. A friend once remarked that he felt that his paintings never went through an ugly stage, and that even when incomplete, he was generally satisfied with how they were progressing. I didn’t get it–was this like a parent who was sure that their child never misbehaved? Admittedly, I got ideas from the ugly stage of my work, and it usually worked itself out, either because I trashed the piece without damaging my artistic self-worth, or because it turned into something worth keeping.

Or sometimes, it’s because the awkwardness is interesting. I can’t imagine drawing a teen and not having it show in her features, or in how she holds herself. In the case of the drawing that begins the post, the creatures compete for attention, creating an awkward composition. I can accept that, even if it rubs me the wrong way. 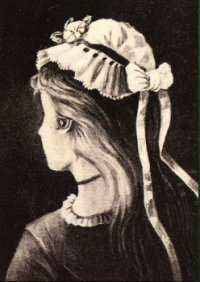 Now I feel that the dichotomy is heavy handed, even as I reproduce it on my own terms, with the models at hand. (Bogart, the cat who posed for the drawing, is currently ignoring me.)

So far, my pen drawings of the past year have morphed between forms organically, so that they look more like dreamscapes than optical illusions, even less tied to reality than the image featured at the beginning of the post. People can find the drawings off-putting if they primarily appreciate art technically, searching in it for things they recognize. They don’t seem to get past whether something is a desk lamp or an eel.

With thematic illusions, like the girl/crone image, the compression of space is not an issue, as it can be rationalized. The Cats less so. The viewer has the same experience of flicking between views, without an intellectual reason for it. And it’s awkward sitting with tension. 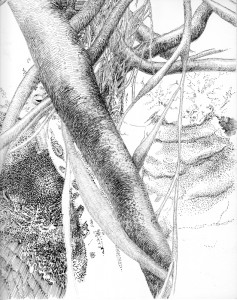 In school, I was never good at defending where an idea came from, or worse, my choice of media. In high school & college, I chose to work digitally because I knew the tools, not because it added to the work, much to my art professors’ disapproval.

Now that I spend much of my free time drawing, I still believe in the importance of arbitrary choice. I’m a firm believer in odd dimensioned paintings (that fit in the car, for transport to shows) or drawing  on  fabric caught on an embroidery hoop  (to create a scroll that wouldn’t need to be framed, and so avoid the upfront cost of framing), or choosing to work small, because it’s easy to transport, and I can work on it on my lunch break. All arbitrary reasons that make art making accessible.

Integrating life and art leads to odd juxtapositions. I don’t know how long I’ve spent staring at the olive trees on my lunch break–the twisty roots, and sensible pruning–and learned to “see” them from drawing.

Let me show you the olive tree  from my office park: 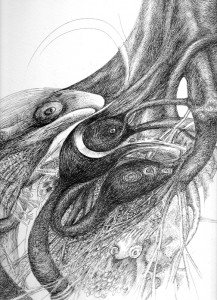 Did you notice the whale?

It’s the best part, but it wouldn’t have happened without the olive trees.

Let me show you how it got there.

How The Whale Joined The Olives

Three years ago, Richard Boyle, a scientist who studies “the ear in space” gave me cross section photographs of the little pockets of hairs in the inner ear.  My initial drawings looked like tiny wrigley stalagmites, and I put them everywhere.

I drew those hairs so many times, and so many places they didn’t fit, that they stopped being patterns, and started to become tube worms, and anemone arms.

Then the fish appeared. 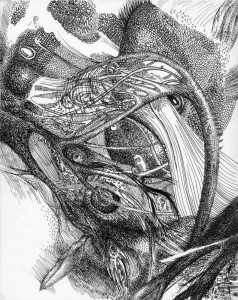 I got a new job. At my new job, I quickly began to choose my parking spots based on the view. Which olive tree had the knobbiest roots? And, for a bit of practice, I drew olive roots at lunch.

When my olive roots were no longer exciting, I slid the work to the end of the stack of “work to do” to protect it from the wastepaper basket. In the meantime, I drew, with no composition, sketches of things I saw, on a piece of paper I was reluctant to change while white still remained. Here it is in its early stages: 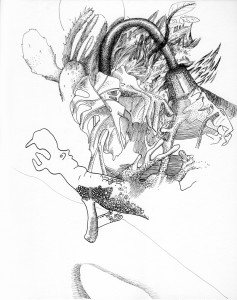 Notice the hippo figurine, the desk lamp, and the houseplant? 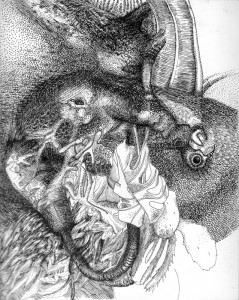 The “stuff” now has character. They’re creatures I’d like to meet.  From the top left, a newt like creature is swimming into the frame and in the middle, a large jawed creature with a small eye is doing his best to turn into a piece of coral. Why not?

My newt, sea creature, and coral combination had enough life that I accepted that my ocean creatures could exist in their own right. So,  when two lines and a few scribbles on my olive roots reminded me of a whale, I was willing to run with it, rather than shelving the drawing.

Ideas that appear spontaneously are worthwhile. Most of us accept evolution in science, and most of us don’t discount how well put together a bird looks, just because the depth of his beak wasn’t a premeditated decision. (Must have a bigger beak now!) The bird is a coherent whole, even if his anatomy developed piecemeal, over the lives of many many birds. It’s the same with ideas in art.

If I were to create work that was just for me, which no one else ever saw, then creating a visually arresting object would be enough. But as soon as I show the work to someone else, they want a logical context for the work. Not that logic wasn’t at work before, it was just logic over time, iteratively, a very different kettle of fish. And no one’s interested in dealing with lots of little fish, when they could have one large fish instead. Why have several tangential explanations, when you could have one? So out comes the fish compressor and hopefully what results isn’t the pacific equivalent of a meal of compressed chicken (my feelings when reading artist statements).

But Where Did Your Idea Come From? It’s not that the person asking the question really wants to know where it all comes from–they just want a compass to get their bearings. From my point of view, they want the biggest arbitrary decision, from which all other decisions flowed logically. The premise.

It started with an ear.

The art that most inspires me is art that keeps me so busy looking, touching, and experiencing, that I forget who made it.

The Kiss, by French sculptor Auguste Rodin, is a great example. 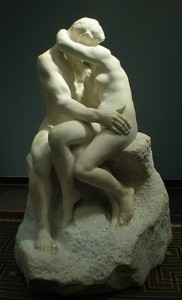 The Kiss, 1886, by Auguste Rodin. Photographed by Philipp Weissenbacher

Once I re-emerge from a great work, I puzzle my way through it, to understand intellectually how it worked emotionally, and learn more about the history of the work. Having exhausted my own bookshelves, I’ve been reading far too many wikipedia biographies of famous people– Antoine de Saint-Exupery, Lewis Carroll, Maurice Sendak (who wrote Where The Wild Things Are), and Rudyard Kipling.

It’s hard to ignore the way accidents of biography inform the finished work. Saint-Exupery’s plane crash shows up in The Little Prince. Carroll’s love of wordplay and math show up in the Alice books. For the operatic adaption of Where The Wild Things Are, Sendak named each of the monsters after his aunts. And, as for Kipling, India keeps reappearing.

I’m drawing on fairly well-known examples here, but I think the clarity of the example illustrate how non radical the concept is.

Reading Backwards – from Art to Artist

The concept of biography informing art gets dicy when it becomes my own life, and my art. With the myth of the suffering artist locked in the garret, I’m under the impression that other people will be looking for these tendencies in my work. This makes me alternatively egotistical and self conscious. (Maybe it’s the same thing).

If the painting’s black: What will they think? Are there too many fantastical, unhappy creatures? Is it just me deciding that the creature is unhappy? What’s on the page, and what’s in my head?

While most of this is pointless thought, the lack of objectivity is problematic. If I can’t see what they see, I have no chance of seeing the finished work.

I’ve resolved to DO The Work First and stop worrying about it to the best of my ability.

This goes for most things.

So I’ve been trying to figure out how to pace a story (and what to leave out and what to put in) as my brain jumps from one image to another and gets caught on inconsequential details like “why didn’t the man eat my creature.” Some of my questions strike me as rather important. Such as: how should my creature communicate? And to whom?

This leaves me with the overwhelming problem of trying to communicate my love of a creature who doesn’t exist. It’s a bit like being a parent but worse, because I find it hard to communicate his strong points.

You understand my problem? He’s unlikely to eat you, my dear reader, safely protected by your monitor. He lives in the water, and you on land. Plus, he has a fondness for king crabs and mollusks.

He’s not a creature from the black lagoon, even though others of his kind have been slurred with similar descriptions. And while I don’t understand him–they–the scientists don’t either. He’s alien. He thinks with his legs, and tastes with his skin.

My character is like having a misplaced crush. I can’t explain why I like him. And it’s irritating, because I want you to like him too.

I can point to the cool things that he does, but his liabilities seem so overwhelming that it’s hard to conceive of him as having friends. Loner really isn’t a cool word, although it probably best sums up his lifestyle. Perhaps we’ll go for independent, hmm?

For now we’ll stick with “because I say so” when I tell you that he’s brilliant, and clever and smart and . . . he’s a bit of a mystery, my creature, with only highlights of an adventurous life.