I’ve been playing with the concept of how writing adds to visual artwork, either in the form  of titles, surrounding text (in the case of illustrations), or artist statements. Often the title feels like a placeholder, e.g. “Abstract No. 1,” I and I’m left with the feeling that the title was forced on the work to keep the archivist happy, rather than to help me  as a viewer. A notable exception is Paul Klee’s Two Men Meet, Each Believing the Other to Be of Higher Rank, 1903, below. 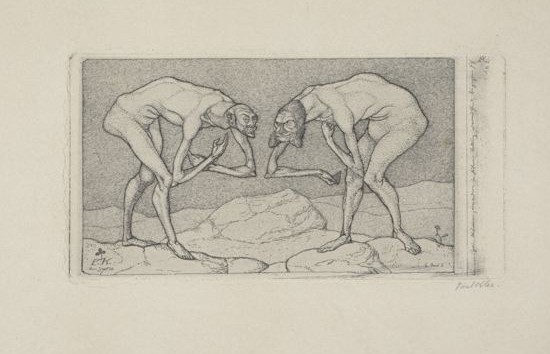 This reproduction of the etching is drawn from the Art Institute of Chicago’s collection of Klee.

Good titles of artwork, such as Klee’s, are rare. When the subject is well known, good titles become unnecessary. If the image depicts  familiar religious stories (e.g. Madonna and Child), or shows historical events, the symbolism is enough to recognize and name the subject, provided you belong to the same tradition.

Life isn’t so easy for the modern artist. Rather than a prescribed cannon of subjects to reproduce, we have infinite freedom. And with that freedom comes, not just the responsibility to create something worth seeing, but something worth reading.

For a visual artist who illustrates other peoples’ manuscripts, the work is done once the artwork is complete. The story line of a book gives a drawing or painting its context. For a visual artist who illustrates his own work, the work has just begun. I’m in awe of Maurice Sendak, and how much he  conveys between his illustrations and the 500 or so words of Where the Wild Things Are. As I’ve yet to write text to accompany artwork; my difficulties start and end with coming up with a relevant title for a piece.

A title is part of a viewer’s first impression of a work, but it fits into the “80” part of the 80/20 rule. It is an extra hurdle and does not come naturally to me. Each new work I create has a working title, if it’s lucky, or if I’m forced to describe it. “The one with the elephant turned upside down” tends not to cut it as a title for an artwork–particularly if I don’t want someone noticing the beginnings of an elephant and asking why the elephant is now upside down, and if I plan to keep it that way.  Even so, most titles for my work start like this.  Once the piece sits,  a new name settles. My titles tend to be short. A particular favorite was “The Odd Couple,” a painting of a man and a woman sitting in a sunlit room with far too much space between them.

Titles need to be just enough to provide relevant context and pick out one aspect of the work. And that’s the hard part. Which is most important aspect of the drawing below? 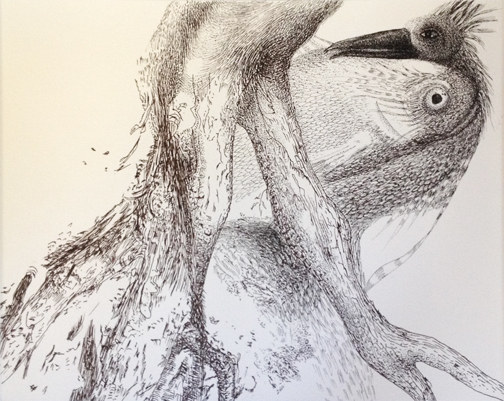 The olive tree, the bird, the fish … or the way the fish mirrors  the bird like a goofy Escher? And what is the most memorable name?  A placeholder – Flying Fish – comes to rescue me. I’ll sidestep the issue and leave you with Flying Fish, which I drew in June 2014.